What is your definition of leadership? The answers may vary as much as the number to those whom the question is posed. Here are a few sample definitions to consider:

“Leadership is the art of getting someone else to do something you want done because he wants to do it.” (President Dwight D. Eisenhower)
–
“Leadership is teaching others to think so they can get what they want.”
(Gary Keller, Co-Founder of Keller Williams Realty)
“Leadership is influence; nothing more, nothing less.” (John Maxwell)
–
In “The 21 Irrefutable Laws of Leadership”, author John Maxwell, one of the most respected voices on leadership in the world, describes five myths of leadership that revolve around the core leadership competency of influence.
–
–

“Leadership is influence – nothing more, nothing less.”
-John Maxwell
–
Myth #1 and Myth #5 often go hand-in-hand with the prevailing belief that “once I get into a position of power and responsibility, THEN I will be a leader”. In reality, leadership (via influence) precedes the position.
–
Furthermore, leadership is not limited to certain titles. We can and should be developing leaders at all levels of an organization.
–
Leadership is a choice. It is how you decide to show up in the moment. You can lead in a conversation, lead a meeting, lead an idea, lead a project, lead a continuous improvement effort and lead in so many other official or unofficial ways, with our without the formal title of “manager”. This is what Maxwell means by influence.
–
Managers have responsibility for a team to perform a certain function. They may allocate resources, make decisions and ensure deliverables are met. They may or may not also be leaders. Great leaders may or may not also be managers.
– 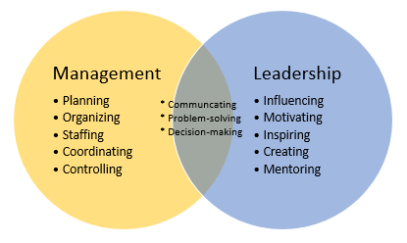 Which one of the five leadership myths above may be holding you back?
Read more on Maxwell’s “Five Levels of Leadership” here.