In his book, “Extreme Ownership”, leadership consultant and retired Navy SEAL officer, Jocko Willink shares the essence of the work in one overarching statement: “The book derives its title from the underlying principle — the mind-set — that provides the foundation for all the rest: Extreme Ownership. Leaders must own everything in their world. There is no one else to blame.” Embracing this principle can be simultaneously empowering and daunting. Should a leader take full ownership for a mistake even when the team member is clearly and fully at fault? It depends on what your goal is.

–
Below is a simple illustration of two opposing mindsets and ripple effects of each. The horizontal line going through the middle represents a choice between two states or sets of behavior. Below the line actions include assigning “Blame”, making “Excuses” and living in “Denial”. This shows up in comments or thoughts such as “I would have but they____”, or “I didn’t have enough_____”, or “I came through with my piece but ______ fell short,” or “It’s not my job/not my fault.” On and on it can go pointing the proverbial finger of blame at anyone else but oneself.
–
“If you think the problem is “out there”, that very thought is the problem.”
– Dr. Stephen R. Covey
–
However, above the line we find the opposite behaviors of demonstrating “Ownership”, being “Accountable” and taking “Responsibility”. Ownership includes accepting blame, apologizing, and stepping up to lead without being asked. Accountability is about following though and being able to be held to account for completing commitments. Breaking apart the two words that comprise responsibility (response and able), we accept the idea that whatever happens and no matter the circumstances we retain the ability to choose our next move. Rather than being hostage to knee-jerk reactions, we are able to respond.
– 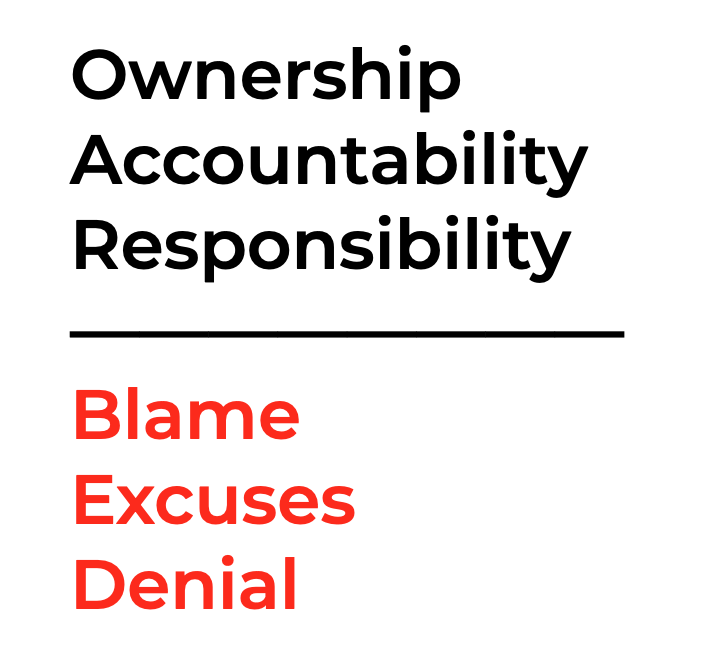 –
Below the line, notice the acronym B.E.D. It evokes a sense of being stagnant, lying in bed, going nowhere, remaining reactive. The world is happening to you. It is a “Victim” mindset.
–
Contrast that with the acronym O.A.R. above the line. It conjures up an image of movement and progress. You are happening to your surroundings and it is proactive. This is a “Leader” mindset.
–
Of course, no one is perfect so we all go below the line at times. The question is, how long do you want to stay there? Are you even aware of it? Most importantly, which approach gets you closer to your desired outcome?
Consider the dynamics, norms and culture on the team you lead. Are team members spending the majority of time above the line? Would they say you are as leader? What could be possible if a concerted effort existed to make that a priority? Teams that do are more productive, generate higher quality work and enjoy one another more in the process.
–
Remember, the line represents a choice and we all have the freedom to remain in victim mode or take a different course of action and embrace Jocko’s challenge to us as leaders: “Leaders must own everything in their world. There is no one else to blame.”
–
HOW TO BEGIN BUILDING A CULTURE OF OWNERSHIP:

“How have I been complicit in creating the circumstances I say I don’t want?” – Executive Coach Jerry Colonna